Black locust flowers are delicious, sweet and aromatic. Black locust tree is, for us europeans, an invasive species (native to United States, imported back in 1600), naturalized now in many parts of Europe.

I feel this is a good reason to eat its flowers without feeling any remorse…with the impression of playing a role in controlling the invasion.

Bark, leaves and seed pods are toxic. You can eat only flowers. In Italy and France, R. pseudoacacia flowers are usually eaten as fritters, after being coated in batter and fried in oil.

Why I took so many flowers?

I was in a beautiful and incontaminated spot and, here it was, a black locust grove at the foot of the big rock upon which I was strolling along. Branches were easily reached from the edge of the rock, if you are not suffering from dizziness. Trees tried to drag me down, but finally I won a big bag of sweet and immaculate flowers! And now comes the real challenge: use them all. Let’s begin with this evening experiment: a light and easy dessert with something I have already in the fridge…close to nothing, as usual.

Thank you Sylvia for suggesting this cute name! It fits a lot better than “yogurt pudding”!

Wash flowers, remove stems and put them in a saucepan with the milk. Bring it to a boil and simmer for a few minutes. Turn off the heat, cover with a lid and let it rest for a few minutes allowing the flowers to release their aroma.

In the meantime soak gelatin sheets in very cold water, they will soften in about 10 minutes.

Strain the milk, pressing the liquid out of the flowers gently. Instead of throwing them away I ate the flowers right away… they are delicious.

Warm the milk again in the saucepan, add the sugar, the yogurt and gelatin sheets, stirring gently until they are completely melted. That’s it: the pudding is ready to be poured in the moulds. Let them sit in the fridge for at least 4 hours before serving. I used silicone moulds, rinsed and not dried, so that the pudding realeases more easily from the mould. This is the only difficult part of the recipe: releasing the pudding from the tins!

I served it with a narrowleaf plantain (Plantago lanceolata) syrup that, with its “grassy” taste, balances the sweet flavour of black locust flowers. 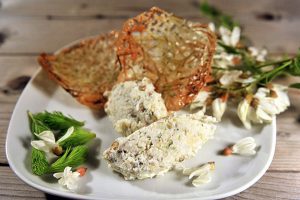 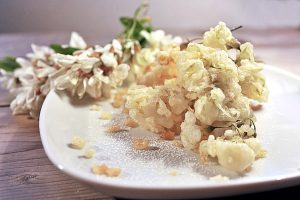 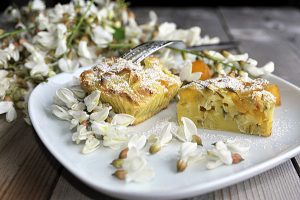 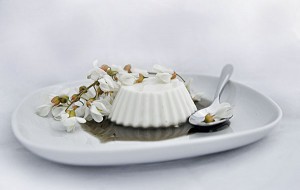