The succulent Good King Henry is fairly common in mountain areas but Lamb’s quarters can be found everywhere, and is considered a pesky weed in vegetable gardens. Both of them are a highly nutritious food source!

That’s why I made this recipe: i pulled off some weeds in my vegetable garden and got a handful of Lamb’s quarters. Not happy with that, I mowed the lawn and accidentally cut some Good King Henry plants…gosh!

I don’t want to waste it.

Leaves are the edible part of both species of “wild spinach”. Find more information is in “Species Profiles”

First time I tasted these gnocchi was at Giovanni’s home, some years ago, and I was struck by the ease of this recipe. He told me that it’s a traditional peasant dish, the one you made in mountain hut, where there was no fridge and the only vegetable you could reach was the one you had right out of the door. Terrific!

Enough to arouse a citizen’s romantic imagination… Today I added some Elderflowers and lunch is ready!

Cook wild spinach for some minutes in a large frying pan with half a glass of water and a pinch of salt. Then drain and squeeze well.

Put all the ingredients in a food processor, exept elderflowers and butter, which will be the last garnishment. Blend until smooth: the mixture should be holding together well, but still a bit sticky.

Let it rest for about 10 minutes. In the meantime bring salted water to a boil in a large pot.

Once the gnocchi bob to the top, cook until just tender, about 2 minutes, than drain. Put them in the dishes, pour the melted butter over the gnocchi (or some olive oil, if you like), garnish with elderflowers and serve immediately. 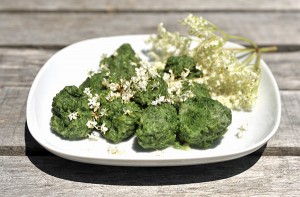 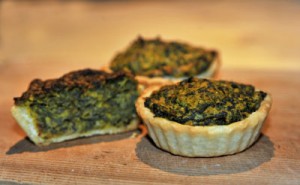